Showing posts from 2010
Show All 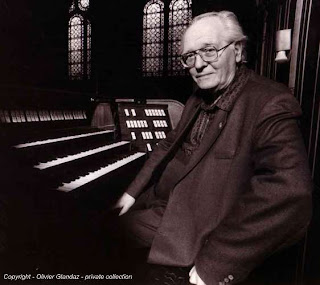 Olivier Messiaen (1908-1992) Olivier Messiaen hardly needs any introduction at all. He was one of the most influential composers of the 20th century and organist at Trinité in Paris for 61 years! Here is a little excerpt from Wikipedia anyway: “Olivier Messiaen; December 10, 1908 – April 27, 1992) was a French composer, organist and ornithologist, widely regarded as one of the major composers of the 20th century. His music is rhythmically complex (he was interested in rhythms from ancient Greek and from Hindu sources); harmonically and melodically it is based on modes of limited transposition, which he abstracted from his early compositions and improvisations. Many of his compositions depict what he termed "the marvellous aspects of the faith", and drew on his deeply held Roman Catholicism. He said he perceived colours when he heard certain musical chords, particularly those built from his modes (a phenomenon known as synaesthesia); combinations of these colours, he said, w
4 comments
Read more 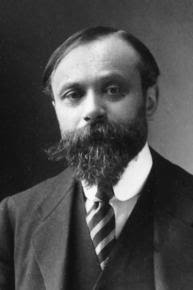 I’ve been rereleasing some recordings before, but I’ve never rereleased a whole set of recordings before. The reason why I’m rereleasing the Complete Charles Tournemire is because the present transfer is simply the best restoration of I’ve ever heard. The original 78s are from the collection of Michael Gartz, who has been a great supporter of this site and is remastered by Charles Lever. When you remaster old recordings, you are always faced with problems concerning how much noise you are going to remove and how much equalization you are going to make. When you remove noise, you always remove a little bit of the music as well. So when you restore old recording, you are in fact interpretating the music as well; you can alter the actual the timbre of the instrument and you can “color” nuances as it fits you – in other words it is basically up to the aesthetics of the audio technician how the music is going to sound! I’ve heard many(!) transfers of old recordings, some are completely fr
2 comments
Read more 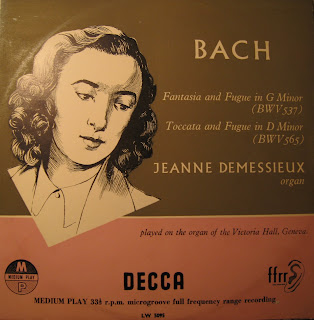 This release consists of three sets of recordings. First we have yet another release with the ever inspiring Jeanne Demessieux playing the infamous J. S. Bach Toccata and fugue in d and the J.S. Bach Fantasie and fugue in g-minor from Victoria Hall in Geneva. She recorded several times at Victoria Hall in Geneva. These two pieces were recorded in September 1953 and released on Decca in 1954 on a 10 inch LP. Her version of the Toccata and fugue in d-minor is simply the most electrifying version, I’ve ever heard, and I’ve heard many recording of this piece – it rivals Alfred Sittards great rendition of it from 1928 in Hamburg. The next two items are Günther Ramin playing Max Reger, a Deutsche Grammphon 10 inch LP from 1958. The cover states, “Thomaskantor Günther Ramin an der Beckerath-Orgel”, but it doesn’t state where, and I simply can’t find out. I’ve searched the internet, so please help me here… I found a not-so-fond-of review from The Grammophone, July 1958, which among other thi
5 comments
Read more 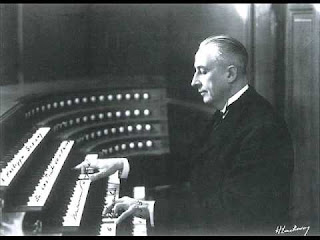 Now it’s time for another Marcel Dupré release. This time is probably some his earliest recordings made in Queens Hall, London in 1926 and 1927. Marcel Dupré marked in many ways the “modern” way of playing, and he was immensely popular everywhere he played and most definitely also in England. HMV was, as far as I know, the first European record company who seriously made organ recordings. I think it was due to the fact, that many of the organists in England were very popular to the people in general. The many concert hall organs popularized the organ and organ music, and many organists could fill concert halls with an enthusiastic audience. So in England were a broad marked for selling organ recordings. A lot of these recordings are, taken the age in consideration, of very high quality and the sound is remarkably clear. One easily forgets that the recordings are over 80 years old. These recordings are important of several reasons. First of all they document the organ at the old Quee
1 comment
Read more 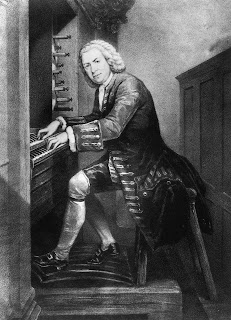 This is the 20th release and to celebrate this I’ve chosen different works by J. S. Bach played by five different organists. As you can see, there are two duplicates; the Alfred Sittard and Fernando Germani have already been released (IHORC-02 and IHORC-11) but the transfer was made from other 78rpms which are of a quality worth presenting here. Looking back over the 20 releases here on IHORC, it’s very clear that recording organ works J. S. Bach for an organist of that period was standard, and the repertoire is quite broad. Of course there are numerous versions of the famous Toccata and Fugue in d minor, but about all genres of his organ works are represented here in some form or another. All the organists tried their hands on the “big ones”, but they also ventured into the more elusive parts of his organ production, e.g. Heitmann recorded the “Kunst der Fuge”, Walcha the “Schübler Chorales” (on the other hand Walcha has recorded the complete works twice, so he is a little out of the
1 comment
Read more 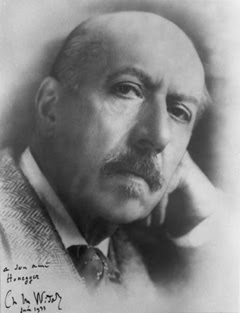 Charles-Marie Widor (1844-1837) was and still is like Louis Vierne, one the most important organ composers and all organists know that he was organist at the famous Saint-Sulpice in the heart of Paris for 64 years. With the help from the organ builder Aristide Cavaillé-Coll he became a student of Jacques-Nicolas Lemmens and was later to become professor at the Conservatoire in Paris succeeding César Franck. Through his work as a teacher, he defined the way of organ playing, a tradition and style which is still alive today. As an advocate of the instruments of Cavaillé-Coll, he helped to inaugurate several very important instruments, such as Notre-Dame de Paris, Saint-Germain-des-Près, the Trocadéro and Saint-Ouen de Rouen. Like Louis Vierne, his influence cannot be underestimated. We are so fortunate, that he did choose record 6 sides for the French department of HMV (called “La Voix de son Maître”) in 1932, the year before he retired. It’s quite obvious, that he or his recording comp
Post a Comment
Read more 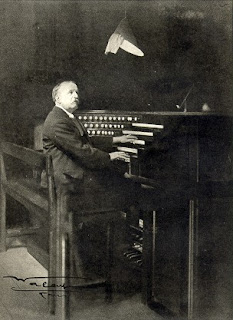 Louis Vierne (1870-1937), the famous organist of Notre Dame de Paris, hardly needs any introduction. As a student of César Franck and Charles-Marie Widor he quickly rose to fame and became assistant to Widor at Saint Sulpice in 1892. From 1900 until his death in 1937 he was titulaire at Notre Dame de Paris. Louis Vierne’s importance as an organist and composer cannot be underlined enough. His musical legacy is immense – just think of how many of his works are in the core of the standard repertoire of every organist. So it’s with great pleasure, that I’m now able to present one of the most legendary cycle of organ recordings. These recordings were made in November 1928 and allow us to listen to the almost intact Cavaillé-Coll organ from 1868. As far as I can read, the only modifications made until 1928 was done by Louis Vierne in 1902. The recorded repertoire is typical for the period. There is a collection of smaller pieces by J. S. Bach, a single piece by Vierne himself and three imp
Post a Comment
Read more 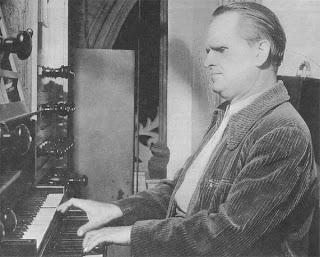 We continue with the third part with Helmut Walcha playing J. S. Bach from Sct. Jacobi Kirche, Lübeck and Cappel. Again, like IHORC-16, it’s from his first cycle of the complete J. S. Bach from 1947-52. The Toccata, Adagio and fugue in C major, BWV564 and Toccata and fugue in d minor are recorded in Sct. Jacobi, BWV565 while the Fantasia and fugue in g minor, BWV542 and the Pastorale, BWV590 are from Cappel. The real gem in this release is the Pastorale, where he shapes the pieces with much grace, and we really get to hear the beautiful flute stops of the organ. A bit unlike other his interpretations he fires up the drama in the BWV565. Thanks again to Claus Byrith for this release. The picture is Helmut Walcha playing the organ in Alkmaar. Download detailed playlist Download link: http://www.ihorc.com/ihorc/IHORC-17/IHORC-17_-_Helmut_Walcha_3.rar
Post a Comment
Read more 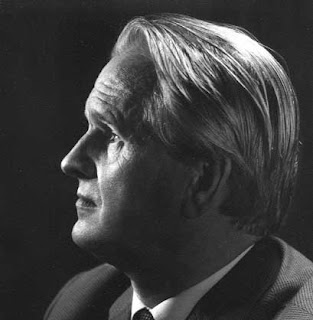 This is the second release with Helmut Walcha. This time it's from his first cycle of the complete J. S. Bach recordings from 1947-1952. The “Sei gegrüsset” and the “Schübler chorales” are recorded at the Stellwagen organ Sct. Jacobi in Lübeck in 1947 and the Preludes and Fugues from 1952 at one of the most important Schnitger organs situated in Cappel. This release is also interesting due the historic importans of two instruments used. This link provides a good insight on the organ of Cappel, and the author of this blog even quotes some text from the original Walcha release. http://mypipeorganhobby.blogspot.com/2009/10/cappel-st-peter-und-paul-1680-schnitger.html I’ve found som info about the Stellwagen organ in Sct. Jacobi Kirche, Lübeck: Die kleine Orgel (Stellwagenorgel, Nordorgel) ist deshalb kulturgeschichtlich von allergrößtem Wert. Das gotische Blockwerk von 1467 baute Friedrich Stellwagen 1636/37 zum Hauptwerk mit Schleif-Windladen um und fügte Rückpositiv, Brustwer
Post a Comment
Read more 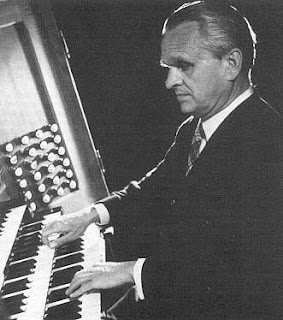 Helmuth Walcha (1907-1991) It’s now time for a release with the famous German organist Helmut Walcha. This is the first of initially 4 releases with Walcha playing J. S. Bach. He recorded the complete works by J. S. Bach twice, from 1947-1950 in mono on the Schnitger organ in Cappel and in St. Jakobi in Lübeck and 1956-1971 on the famous organ in Alkmaar. This release is from the Alkmaar serie and is therefore in stereo. A quite interesting thing is to compare it with the IHORC14 release, where Fernando Germani plays the exact same organ about two years later. The next part is from Wikipedia: Helmut Walcha (October 27, 1907 in Leipzig, Germany – August 11, 1991 in Frankfurt am Main, Germany) was a blind German organist who specialized in the works of the Dutch and German baroque masters and is known for his recordings of the complete organ works of Johann Sebastian Bach. And whom, despite being blinded at 19 by smallpox, is considered one of the great teachers and performers of the o
1 comment
Read more
More posts