Robert Noehren (1910-2002) was an influential American organist with a broad interest in organ building, performance practice and writing.

He was named “International Performer of the Year 1978” by The American Guild of Organists, and in that connection I’ve found this short biography (http://216.137.149.180/IPYA/NoehrenR.html):

“Robert Noehren (December 16, 1910 – August 4, 2002) enjoyed a long and distinguished career as international recitalist, recording artist, scholar, author, and teacher. He was for many years University Organist and Head of the Organ Department at the University of Michigan. His discography numbers over 40 recordings, from earlier vinyl LPs to a number of CDs made late in his career. Among his many honors were the French Grand Prix du Disque for his recording of the Bach Trio Sonatas. His interest in historical organ building led to numerous trips to France, Germany, and Holland, and the establishment of his own organ building company, where he designed and built some 20 large pipe organs, including a four-manual organ for the Cathedral of St. John in Milwaukee, Wisconsin. Active up until the day of his death, Noehren practiced every day, had plans to make another commercial recording on the large organ he built for First Presbyterian Church, Buffalo, New York, was writing a cook book, and was preparing a lecture for the convention of the American Institute of Organbuilders. He was also a serious composer, having studied with Paul Hindemith.”

This recording was made in Kenmore Presbyterian Church in Buffalo, N.Y. in 1951 on an organ build by Schlicker in collaboration with Robert Noehren. I’ve inserted the back cover of the LP below. 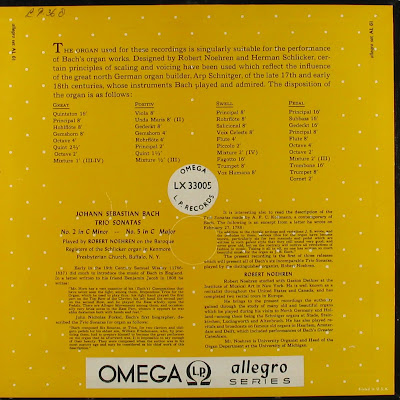 In many respects his organ playing resembles that of Helmut Walcha. It’s clear, intelligent, fluent and a bit restrained. The performances are logical and performed with great control and with a delicate sense for lines and polyphony. The slow movements are beautifully shaped with a very vocal phrasing and the fast movements are never rushed.
Download link:
http://www.ihorc.com/ihorc/IHORC-28/IHORC-28_-_Robert_Noehren.rar
Robert Noehren